English spelling – it’s weird, right? I mean, just take the word “right” – there are four sounds: R-A-Y-T, and so of course, we spell it “RIGHT”.

To the untrained eye, it might seem like some form of masochism to create spelling rules for your language that don’t seem to follow any logic at all. Although English spelling could be made much simpler and logical, there are lots of reasons for it being the way it is. Let’s take a quick look at a few of those now!

The age of the Runey Toons

The earliest forms of English were once written in Anglo-Saxon runes which are believed to have come from the alphabets of Latin, Greek, and various other writing systems that were being used at the time. 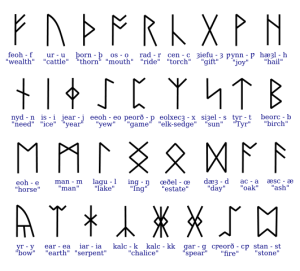 During the 9th century, Christian missionaries from Ireland introduced the Latin alphabet to the English language. By the year 1000, runes weren’t really used much, and they died a gruesome, medieval death when King Cnut the Great banned them shortly after.

When in Anglo-Saxon England, write as the Romans did

So people started using the Latin alphabet to write English. So what? What does that have to do with the ridiculousness of English spelling? Well, in a word, “everything”. The Latin alphabet was great for writing Latin, unsurprisingly. Pretty much each sound that Latin had was represented by its own letter.

Buuuuuut, Modern English on the other hand, has around 44 separate sounds depending your accent, as was, more or less, the case for Old English. So in order to write English with a much smaller alphabet, new ways had to be created to write these sounds down. For example: æsc (Æ/æ) was used to write a sound like the ‘a’ in ‘cat’, while the letter ‘A’ was used to represent the a-sound we hear today in words like ‘father’. The Latin letter “d” was adapted to write the sound ‘th’ as Ð/ð, and some runes were also kept:  thorn (Þ/þ), also to write ‘th’ and wynn (Ƿ/ƿ) to write the sound “w” – “uu” (double U) or “w” were also used for this. Have you ever seen the word ‘ye’, as in ‘ye olde shoppe’?

Did you know that the ‘y’ there isn’t actually a ‘y’, but a thorn (Þ/þ)?! Over a few centuries, the letter thorn began to change it’s shape, and after a while, it began to look like wynn (Ƿ/ƿ), and then it began to look to like y. When the printing press was invented, the letter thorn was already quite uncommon, and they didn’t bother making presses to write it. Instead, they either wrote ‘th’ or ‘y’. So often the word ‘the’ was abbreviated like this:

So next time you see the word “the” written as “ye”, you’ll know, and you’ll feel like a genius. No need to thank us!

The reason for this is that between roughly the 1350s and the 1600s/1700s, lots of the English vowels changed their sounds in what is called the Great Vowel Shift. English spelling began to be standardised halfway through the Great Vowel Shift, and that is one of the main reasons for some of our silly spelling rules.

As you can see from the table above, this explains the different spellings of “meat” and “meet”, which in Modern English are pronounced the same, but in Old English, were pronounced differently.

In 1066, the Normans invaded and the upper classes of English society were replaced with French speakers. This meant that lots of words entered English from French and their spellings were often brought along with them.

During the Renaissance, things got even more complicated. The Renaissance was a period of loving the ancient Romans and Greeks, and so people started getting freaky with their spelling to express that love affair with the classics.

So the word “peple” comes from the latin word “populus”? So some wise guy thought “Well let’s put an ‘o‘ in it then! We can start spelling it ‘people’!” 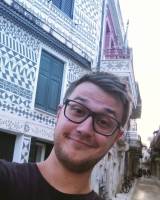 Rob is Memrise‘s English Language Specialist, teaming up with the other language specialists to create language courses that will help you explore the world by unlocking your language superpowers. He also works with Memrise‘s Marketing Team to make fun videos and blog posts to inspire all the language learners out there.

In his spare time, he can usually be found learning languages – currently Hindi & Greek – and exploring the wonders that the London theatre and comedy scenes have in store.